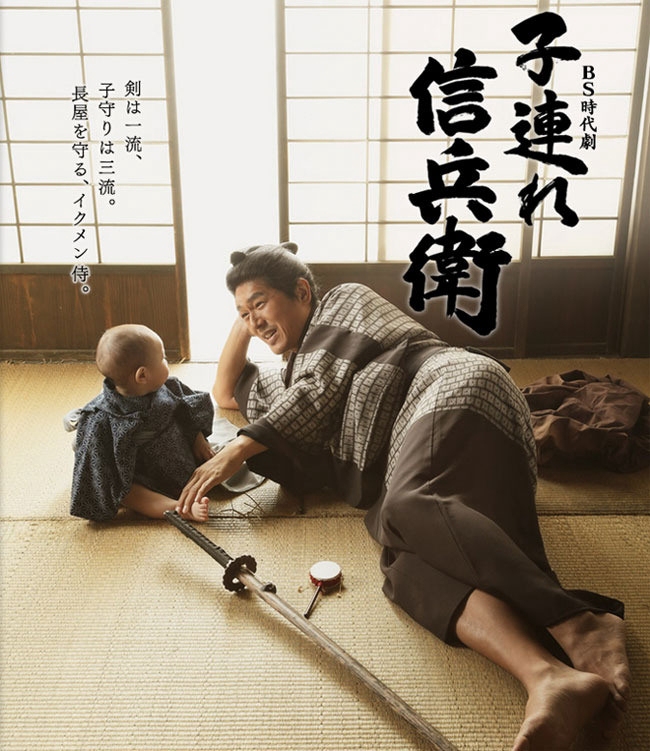 Story
Wandering samurai Matsumura Shinbei earns a daily income challenging and defeating martial arts schools with his vaunted sword skills. He lives a carefree life of a bachelor in a tenement house. One day, another wandering samurai Okiishi Tonomo moves to the tenement house with a baby boy Tsurunosuke. Tonomo’s home was recently demolished and his wife preceded him in death. Shinbei tells Tonomo that he can depend on him if he has any difficulty. The next day, Tonomo disappears and Shinbei ends up having to look after Tsurunosuke despite being ill-equipped to do so. He is unusually popular and all sorts of consultations are brought to him by the people of the tenement house such as the divorce feud of the couple who cannot have children, a young girl’s scam targeting old people and the lifetime training of the unreliable male successor of a coal merchant. This alcohol loving and very skilled wandering samurai struggles to bring up the baby as he runs about to solve problems within the city.

Characters
Takahashi Katsunori as Matsumura Shinbei
A wandering samurai and master of the sword. He loves drinking with a like-minded bunch from the tenement house and is unusually popular. He is suddenly forced to take care of Tsurunosuke who is someone else’s baby. Why he became a wandering samurai is a mystery.

Hidari Tonpei as Jusuke
A resident of the tenement house that Matsumura Shinbei lives at, and a soba hawker. He lives with his granddaughter, Obun. Although he is getting on in years, he still going strong.

Kojima Riria as Obun
Jusuke’s granddaughter. Cheerful and good natured, she is concerned about Matsumura Shinbei who lives alone and meddles in his daily life.

Miyata Toshiya as Enokido Seizaburo
A constable of the Kitamachi Magistrate’s Office. He is still inexperienced, but has a strong sense of justice, integrity and passion for his work. He is interested in Matsumura Shinbei.

Harada Ryuji as Okiishi Tonomo
A wandering samurai. Tsurunosuke’s biological father. His home was destroyed recently. Furthermore, his wife died before him.

Aoyama Noriko as Oyou
A mysterious moonlighter who has been stalking Asanuma Ukyonosuke. She has a one-track mind and alternates between frosty and kind demeanours.

Kato Masaya as Asanuma Ukyonosuke
A wandering samurai and guest of Orikasa martial arts training hall. He is being pursued by Oyou because of a past incident.

Sasano Takashi as Orikasa Gorozaemon
The head of Orikasa martial arts training hall. His sword skills are rather poor. He is impossible to hate and is good at gaining people’s trust.

Nakamura Katsuo as Koizumi Dosen
The town doctor. He has known Matsumura Shinbei since the latter was a child and his freewheeling behaviour has also has an influence on Shinbei.